Biosecurity deals with the prevention of misuse through loss, theft, diversion or intentional release of pathogens, toxins and any other biological materials.

Biosecurity exceeds the field of competence of public health and is not currently covered by the duties formally entrusted to the SBB by the Cooperation Agreement concerning biosafety. Nevertheless, this topic noticeably has many points in common with biosafety and as such, the scientific and technical expertise of the SBB can easily be developed in the field of biosecurity, particularly with regard to the contained use of pathogenic organisms (genetically modified or not). This informative page aims to tell how the biosecurity concept has emerged and has established naturally a closed link with biosafety.

In the 1990s there was little awareness of the consequence of misuse of the life sciences or the power of new technologies such as Synthetic Biology (to define). Today biosecurity is a matter of concern and has been increasingly recognized as a national and international priority (Inglesby and Henderson 2012). Very often the emergence of biosecurity is associated in Western countries with the episode of the “Anthrax letters” (i.e. letters containing spores of B. anthracis) sent after the attack of the World Trade Centre in 2001 (Jernigan 2001). These events have revived fears about the use of biological agents as bioweapons in terrorism activities. In theory, those terrorist activities could be directed against humans, animals or even cultivated crops.

To this resurgent awareness of the potential terrorism use of biological material, other factors have supported the idea that biosecurity measures should be implemented around activities with biological agents:

Therefore various initiatives at the international level and in some countries have been taken to reduce the potential risks linked to a terrorist attack or a deliberate or accidental release of biological material or pathogenic agents, whether genetically modified or not (see Annex 1).

Whereas biosafety aims at protecting public health and environment from accidental exposure to biological agents, biosecurity deals with the prevention of misuse through loss, theft, diversion or intentional release of pathogens, toxins and any other biological materials.

The two following sentences are often used to briefly define biosafety and biosecurity:
“Biosafety is to keep bad bugs away from people”
“Biosecurity is to keep (malevolent) people away from bugs”

The prevention goals of biosecurity are defined independently of the origin of the biological material. It is considered that biosafety and biosecurity are complementary to address biorisk issues. With time biosecurity has become associated with biosafety to form the contemporary approach of “biorisk management”.

It is not so surprising that the biosecurity issue has been found on the agenda of international organisations (UN) and professionals active in the field of biosafety (the American and European biosafety associations, ABSA and EBSA).

In 2006 the WHO issued for the first time a guidance entitled “Biorisk Management – Laboratory Biosecurity Guidance” which defines several fundamental notions to understand biosecurity such as: “Valuable Biological Materials”, “Dual use”, “accountability”, “misuse” etc. (WHO, 2006) (see definitions). This guidance is defined as a complement to “laboratory biosafety guidance” issued earlier.

An additional document entitled “Responsible life sciences research for global health security” has been published by WHO (WHO, 2010). This guidance added some key elements to take into account for people involved in research and development (R&D) with biological materials that may have a potential to be deliberately misused in the development of bioweapons (see Annex 2). This is what is called Dual-Use or DURC (dual-use research of concern) in life sciences research. It refers to technologies which can be used for both peaceful and harmful aims.

A report of the U.S. National Academies published in 2004 gives some prerequisites to help preventing the misuse of biotechnology research (USNA, 2004). The Fink report defines seven classes of experiments where DURC experiments are described. This list of experiments was later completed by the Centre for Applied Philosophy and Public Ethics, Australia in 2006 (see Annex 3).

Many examples supporting the necessity to develop biosecurity measures are detailed in the WHO guidance issued in 2010. A current reference document describing the technical, behavioural and management measures based on biological risk assessment is the Laboratory Biorisk Management CWA (CEN Workshop Agreement) 15793:2008 revised in 2011. The main elements of laboratory biorisk management system are the following:

It is worth mentioning that, more or less 80% of what is called “biosecurity” is actually covered by “biosafety measures” as referred to an analysis done in Germany (Dr. Volker Beck, technical advisor to the German Federal Foreign Office, personal communication, Berlin 2006). Figure 1 shows a schematic representation of the complementarities and differences between biosafety and biosecurity with a common central goal: the protection of the VBM from misuse. 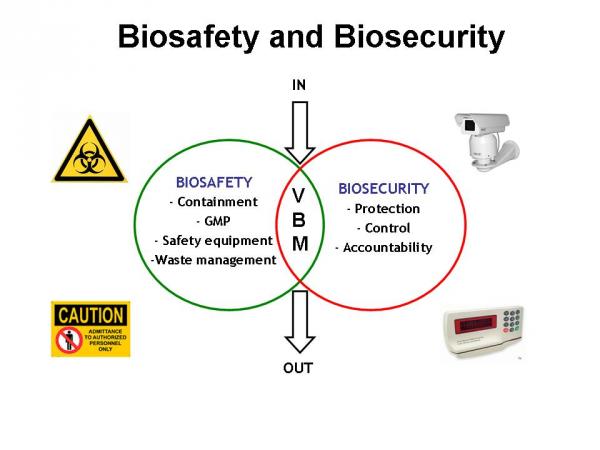 Figure 1. GMP: Good Microbiological Practices, VBM: Valuable Biological Materials: IN and OUT refer to the complete traceability of all biological materials handled, stored and transported.

Finally, it is important to distinguish two different goals when managing biorisk:

To date there is no specific legislation in Belgium concerning biosecurity (biobeveiliging, biosûreté). Although all scientists receive an authorization (environmental permit delivered by the regional competent authority) for the contained use of genetically modified organisms and/or pathogens, the potential issues of laboratory security and biological weapons are not addressed (dual-use, Biosecurity risk assessment). Some institutions decided a few years ago on their own initiative to adopt some biosecurity measures.

In Belgium, the appointment of a biosafety officer, BSO (“Bioveiligheidscoördinator” or “Responsable de la biosécurité”) and the setting of a biosafety committee became compulsory when Directive 98/81/EC was implemented in the 3 regional Decrees. This measure is required for every institution where genetically modified organisms and/or pathogens are contained. The role and the main tasks of the BSO and the biosafety committee are defined in the Decrees.

It is worth mentioning that in the CWA 15793:2011 the role of the BSO covers both biosafety and biosecurity. In Belgium this interpretation is not in force.

Biosecurity in other EU states

A legal biosecurity system is already well organized in several European countries such as Denmark, United Kingdom, France and the Netherlands. For more information, see Annex 4.

When not specified, the definition are taken from the WHO guidance (WHO/CDS/EPR/2006.6)

Accountability: Accountability ensures that Valuable Biological Materials (VBM, see definition below) are controlled and traced as intended, by formally associating the specified materials with the individuals who provide oversight and are held responsible for them.

Biorisk: The probability or chance that a particular adverse event (in the context of this document: accidental infection or unauthorized access, loss, theft, misuse, diversion or intentional release), possibly leading to harm, will occur.

Biosecurity: the protection, control and accountability for Valuable Biological Materials agents and toxins within laboratories, in order to prevent their loss, theft, misuse, diversion of, unauthorized access or intentional unauthorized release.

Biosafety (BE legal definition): Safety for human health and the environment, including the protection of biodiversity, during the use of genetically modified organisms (or micro-organisms), and during the contained use of pathogenic organisms for humans. A combination of procedures, containment measures and construction technologies with the purpose of minimizing the risk of contaminating laboratories and prevent escape of GMO and/or pathogens into the surrounding environment.

Code of conduct, code of ethics, code of practice: Non-legislated guidelines which one or more organizations and individuals voluntarily agree to abide by, that set out the standard of conduct or behaviour with respect to a particular activity.

Contained Use: any operation in which micro-organisms are genetically modified or in which genetically modified and/or pathogenic micro-organisms are cultured, stored, used, transported, destroyed or disposed of and for which physical barriers, or a combination of physical barriers together with chemical and/or biological barriers, are used to limit their contact with the general population and the environment (definition from the Belgian legal framework).

Dual Use: Dual-use items are goods, software and technology normally used for civilian purposes but which may have military applications, or may contribute to the proliferation of Weapons of Mass Destruction (WMD). Regulation (EU) No 388/2012 of the European Parliament and of The Council of 19 April 2012 amending Council Regulation (EC) No 428/2009 setting up a Community regime for the control of exports, transfer, brokering and transit of dual-use items.

Misuse: The misuse of Valuable Biological Materials (VBM, see definition below) describes their inappropriate or illegitimate use, despite existing and subscribed agreements, treaties and conventions.

Synthetic Biology: the definition by the SynBio community is “the design and construction of new biological parts, devices and systems and the re-design of existing, natural biological systems for useful purposes” (Schmidt and Pei, 2011).

Threat: The likelihood for an adverse event to occur, as an expression of intention to inflict evil, injury, disruption or damage.

Transfer of VBM: Legal and/or administrative policies and procedures relating to the oversight and approval process for the transfer of custody and/or ownership of Valuable Biological Materials (VBM, see definition below) between countries, entities (organizations, institutions, facilities, etc.) or individuals.

Transport of VBM: Procedures and practices to correctly categorize, package, document and safely and securely transport VBM (see definition below) from one place to another, following applicable national and/or international regulations.